Buy instead the original edition at https://www.amazon.co.uk/Think-Grow-Rich-Original-Restored/dp/0990797600 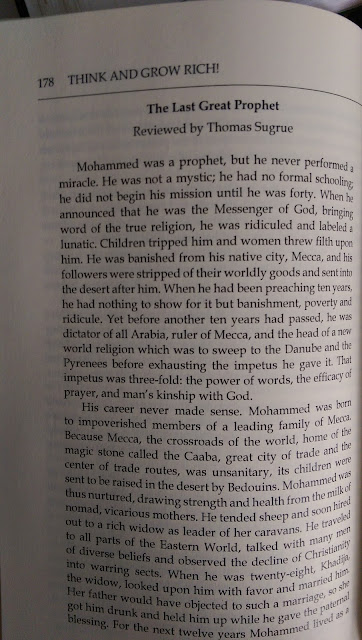 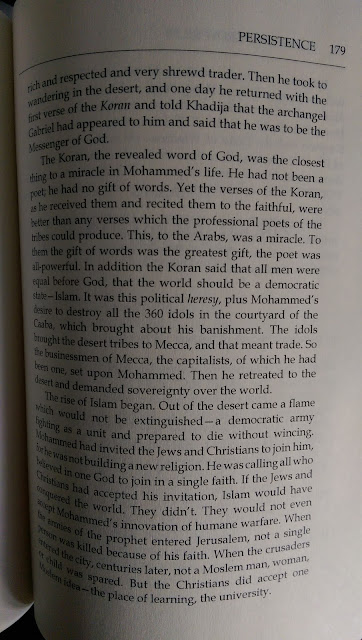 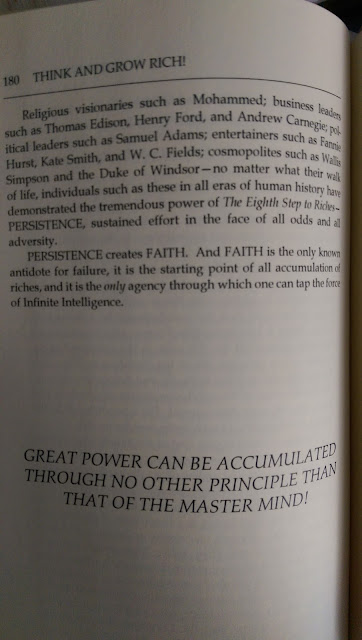 Mohammed was a prophet, but he never performed a miracle. He was not a mystic; he had no formal schooling; he did not begin his mission until he was 40. When he announced that he was the Messenger of God, bringing word of the true religion, he was ridiculed and labelled a lunatic. Children tripped him and women threw filth upon him. He was banished from his native city, Mecca, and his followers were stripped of their worldly goods and sent into the desert after him. When he had been preaching ten years, he had nothing to show for it but banishment, poverty and ridicule. Yet before another ten years had passed, he was dictator of all Arabia, ruler of Mecca, and the head of a new world religion which was to sweep to the Danube and the Pyrenees before exhausting the impetus he gave it. That impetus was three-fold:

the power of words,
the efficacy of prayer,
and man's kinship with God.

His career never made sense. Mohammed was born to impoverished members of a leading family of Mecca. Because Mecca, the crossroads of the world, home of the magic stone called the Caaba, great city of trade and the center of trade routes, was unsanitary, its children were sent to be raised in the desert by Bedouins. Mohammed was thus nurtured, drawing strength and health from the milk of nomad, vicarious mothers. He tended sheep and soon hired out to a rich widow as leader of her caravans. He travelled to all parts of the Eastern World, talked with many men of diverse beliefs and observed the decline of Christianity into warring sects. When he was 28, Khadija, the widow, looked upon him with favour and married him. Her father would have objected to such a marriage, so she got him drunk and held him up while gave the paternal blessing. For the next 12 years Mohammed lived as a rich and respected and very shrewd trader. Then he took to wandering in the desert, and one day he returned with the first verse of the Koran and told Khadija that the archangel Gabriel had appeared to him and said that he was to be the Messenger of God.

The Koran, the revealed word of God, was the closest thing to a miracle in Mohammed's life. He had not been a poet; he had no gift for words. Yet the verses of the Koran, as he received them and recited them to the faithful, were better than any verses which the professional poets of the tribes could produce. This, to the Arabs, was a miracle. To them the gift of words was the greatest gift, the poet was all-powerful. In addition the Koran said that all men were equal before God, that the world should be a democratic state - Islam. It was this political heresy, plus Mohammed's desire to destroy all the 360 idols in the courtyard of the Caaba, which brought about his banishment. The idols brought the desert tribes to Mecca, and that meant trade. So the businessmen of Mecca, the capitalists, of which he had been one, set upon Mohammed. Then he retreated to the desert and demanded sovereignty over the world.

The rise of Islam began. Out of the desert came a flame which would not be extinguished - a democratic army fighting as a unit and prepared to die without wincing. Mohammed had invited the Jews and Christians to join him, for he was not building a new religion. He was calling all who believed in one God to join in a single faith. If the Jews and Christians had accepted his invitation, Islam would have conquered the world. They didn't. They would not even accept Mohammed's innovation of humane warfare. When the armies of the prophet entered Jerusalem, not a single person was killed because of his faith. When the crusaders entered the city, centuries later, not a Moslem man, woman or child was spared. But the Christians did accept one Moslem idea - the place of learning, the university.

Religious visionaries such as Mohammed; business leaders such as Thomas Edison, Henry Ford, and Andrew Carnegie; political leaders such as Samuel Adams; entertainers such as Fannie Hurst, Kate Smith and W C Fields; cosmopolites such as Wallis Simpson and the Duke of Windsor - no matter what their walk of life, individuals such as these in all areas of human history have demonstrated the power of The Eighth Step to Riches - PERSISTENCE, sustained effort in the face of all odds and all adversity.

PERSISTENCE creates FAITH. And FAITH is the only known antidote for failure, it is the starting point of all accumulation of riches, and it is the only agency through which one can tap the force of Infinite Intelligence.

These passages were notably absent in Arthur Pell's 2004 edition.

Reviews of this "travesty" can be found at:
http://www.amazon.co.uk/product-reviews/0091900212/ref=dp_top_cm_cr_acr_txt?ie=UTF8&showViewpoints=1

Interesting, is it not, the insidiousness of Islamophobia? Shame on you, Arthur Pell, for omitting these crucial pages in your 21st century edition! Such blatant intellectual dishonesty should not escape criticism.

"PERSISTENCE creates FAITH. And FAITH is the only known antidote for failure, it is the starting point of all accumulation of riches, and it is the only agency through which one can tap the force of Infinite Intelligence."

I love this, absolutely.

I am a muslim. I was amazed when I saw the pages on our prophet Mohammed. It is really sad that they cut them out i the 21th century. Thank you.

Thank you for taking the trouble to get in touch. I hope you will email Arthur Pell and tell him what you think of his deliberate omission.

The ommission only proves how intimidated and scared as well as how much acknowledging the ommitters are of the influence of Prophet Muhammad and Islam.

The Hegelian dialectic leads us to Islam